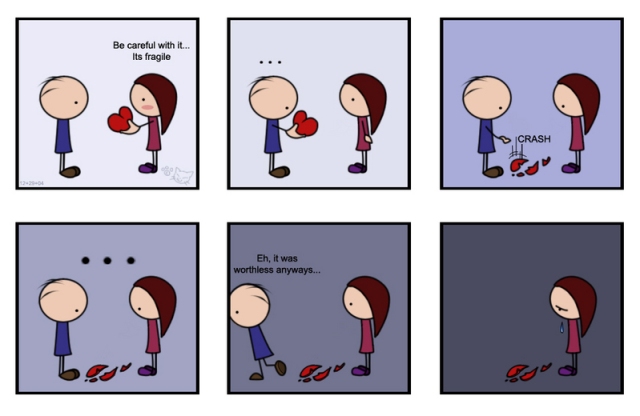 What is something that you feel you have no control over?

I spent the day alone.  I never left my apartment.  I spent the day with my thoughts.  Sometimes I love days like that and other days I absolutely hate them.  I was texting a friend and happened to state that I have not been in a serious relationship in over 6 years.  The last guy I dated was over a year ago and I have not been touched by a man since then.  It hit me for some reason today….I really did give up.  After the last guy and I parted ways I said that I was done….I was not going to date and I was just over it all.  I have said that after every guy that I have dated or been rejected by but after the last one I realized that it really did stick.  Over the past year I have completely opened myself up to a world I had been so blind to but I have completely closed myself off to any form of romantic love.  It feels to me as if that part of me that ached for love at one time has died…or is very broken (possibly beyond repair).  I am tired of feeling sad and hurt and rejected and just not good enough and being 34 years old I have just lost hope.  I told my friend that I equate the wanting to be in a relationship to being weak.  I continually tell myself that I am better on my own because that way I won’t get my heart broken again….I won’t feel the disappointment or the self-questioning.  Dating and relationships are the only aspect of my life in which I question and doubt myself…..and I know how unhealthy that is but I am not going to deny it or lie about it.  I have been broken so many times and the last guy I dated seemed to be the final straw….he pulled me apart and I let him…..he took so much from me and I let him.  I wanted to love him and wanted him to love me back and the harder I tried the deeper the knife went into my heart and I know that is no one’s fault but my own.

You have this idea when you are a kid of what love is like.  Everything is always perfect and your Prince Charming will always say and do the right things and be there in your times of need.  I have never been able to stop believing in this idea….even if everyone tells me that fairytales aren’t real.  I don’t want any man except one that is kind…one that will do everything to not hurt me and will have a picture of me sitting in the back of his mind at all times.  I have always wanted to be someone’s everything and after seeing everyone else feel that and me only feel sad and disappointed I have given up.  I still believe in the fairytale and will only settle for that but it is now in the hands of my prince to find me because I am too exhausted from looking.  What is out of my control sometimes is my feelings and I have felt sad and lonely and when I feel this way I feel weak….I feel like I should know better.  I feel the need to prove to everyone that I am independent and I don’t need anyone to lift me up but I am lying not only to others but to myself.  Into the Wild is one of my favorite movies and Chris McCandless said “Experiences are always better when they are shared.”  He learned this when he hiked through Alaska all by himself before his untimely death…..he realized that his experience was amazing but it was not as amazing because he had no one to share the details with.  As independent as I try to be and as tough as I try to be on the exterior with my “I don’t give a shit” attitude, on the inside I do feel loneliness sometimes and I miss having someone to just be with….even just their presence without words is comforting.