There is nothing I admire more than a powerful, strong woman!  I love the take charge woman that is on a mission to get things done.  Don’t confuse this with the woman that is just a bitch….there is a very big difference.  I do not admire only strong women figures.  There are several male figures that have changed the path of this cruel world that hold qualities that I think are not only admirable but beautiful.  I speak of women so much because I am one and I know the shy little girl that I once was and I have watched myself grow into this woman that has a voice and strives to make a difference.  I see a woman that does not see only the world she lives in but the worlds so far outside of herself.

I don’t know why but I am drawn to the stories of women all over the world.  The women that live in third-world countries where violence and rape are an every day occurrence.  I cannot imagine living in a place where you live every day in fear…where you could be brutally raped and have your family disown you because you have shamed them.  There are women through this horrible circumstances that choose to constantly rise above and fight for the rights and freedoms that they know they deserve.  I admire the women of the world that may be victims of rape or violence but never see themselves as victims.  They are the women that fight for the rights of other women in hopes that they never have to suffer in the same way.

This past year I read the book Half the Sky and I was so glad to see a documentary aired on PBS.  This book changed my life.  This book made me see life through such different lenses and to value women a little bit more.  In the United States women have become CEO’s and have fought their way toward equality.  We still have steps to take and in some areas we may not be complete equals but we are certainly getting there.  I am proud to be a woman from this country because we are fighters and achievers and we are not thought of as lesser of people (for the most part).  In other parts of the world though, women spend day in and day out suffering because they are considered less than even street animals.  Women hold no value in other countries and they are unaware of this because it is all that they have ever known.  Some women believe they truly are lesser of people and less important or valuable because it is the way they have been treated since they were small.  This tears my heart apart completely because no woman should ever feel like that…no woman should ever be treated like that.  It is women that give life….there would be no men if it was not for the beautiful womb of a woman.  I cannot wrap my brain around why women would be considered less of people when they have this miraculous ability to bring life into this world.

Half the Sky is a book with many brutal and saddening details about the torture that women all over the world face day in and day out BUT the significance of the book is to introduce those women that have fought to save themselves and save other women.  It shows to the entire female population the true value of women and there is not one woman that should be treated like or believe that she is lesser of a person just because of her gender.  The women pictured below are the women that I admire.  They are selfless and they are warriors.  I have not experienced what some of these women have gone through but I would love to be part of the process to empower other women….to educate them and to rebuild them so they learn and believe the beauty and the power they all hold.  I see young girls and women (even friends of mine…and even myself from time to time) that doubt themselves and see themselves as lesser than what they are.  These women below do not focus on the superficial but instead empower women by showing them their abilities and their power.  Whether it be in this country or a country many thousands of miles away I ache to tell women (even women that I do not know) how important they are and how valuable they are to society.  I want to hold the hands of my sister and tell them to stop worrying about what is on the inside and allow their inner beauty to shine because each and every one of us have it. 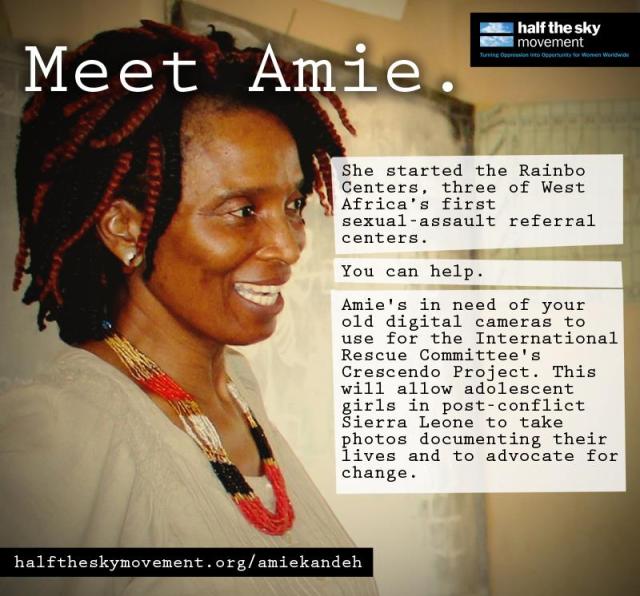