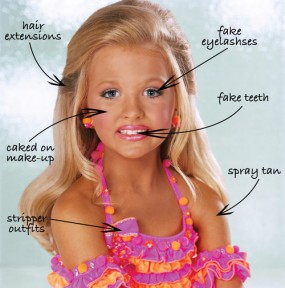 What are your thoughts on children’s beauty pageants?

I will be honest and say that children’s beauty pageants absolutely disgust me.  I don’t look down on the children or blame them for anything.  The only thing that is represented when it comes to these beauty pageants is bad parenting.  I cannot wrap my brain around how a parent could exploit their child in such a way.  I do not know what these pageants entail but what I want to know is what is being taught to these young girls.  If you look at these young girls they have layers of makeup caked on their faces and their hair teased and hair sprayed so high that they can barely hold their head up straight.  Many of these young girls wear false eyelashes and fake nails…I have even read stories of a mother that injected her young daughter with botox.  Why would any parent want this for their child?

Lately, there has been all kinds of talk about this little girl nicknamed Honey Boo Boo Child.  She first became known in the public eye when she was on a show called Toddlers and Tiaras (which shows how desperate we are for entertainment).  This little girl was drinking concoctions of Mountain Dew and Red Bull that were given to her by her own mother.  This little girl was sassy and defiant and her family found it to be all very amusing.  Because of her behaviors on the Toddlers and Tiaras show, she was given her own reality show.  Seriously?????  This is what entertainment has come down to.  We find it entertaining to watch trashy people (sorry but that is the truth) destroy a child’s life.  This child does not understand how unhealthy this lifestyle is.  Her parents are using her to make a quick buck.  This ride to fame is only going to be a short one for Honey Boo Boo Child….then what????  I just find the whole thing to be absolutely disgusting.

I may be being harsh but I am such a nurturer and I believe it is vital to teach children about natural beauty.  Yes, I believe that people should take pride in the way that they look but I don’t think it is healthy to give children a warped perception of beauty.  I don’t think any child should be forced into high heels and nylons and layers of makeup when they are that young.  We are already living in a society where a majority of young girls and women have a self-image complex….pageants like this are going to make the problem even worse.  As a society, we need to start being a little more realistic when it comes to outside appearance.  The average woman is between a size 12-14….which is not HUGE like society portrays.  I have watched several episodes of America’s Next Top Model and the plus-size models that they feature are about a size 8 or 10 and their weight is continually criticized.  REALLY?????  How did we ever get to this place and why would we teach our young children that outside beauty is of the utmost importance.  Looks eventually fade (and will fade even quicker the more plastic you become)….so what is there to fall back on?

I don’t have all of the answers in life….hell I don’t really have any….I merely have opinions.  I believe people can do whatever they choose but when it comes to pageants, I think it is important to go into it with an open and healthy mindset.  I am actually unsure of what the point of this contests really is….young girls and women are crowned as the most beautiful in their state or their country or even the world but who really decides what beauty is??  I have heard many people comment about someone being beautiful and I would disagree with them.  I do know that there is more than just looks in this competitions but dressing up a child like they were a doll and caking makeup on their faces is just not natural.  I believe that a parent that does this is taking away a childhood that is much needed.  I sometimes believe that parents are living vicariously through their children…pushing them into a life that they never had.  Life should not be a competition but it is in all aspects…sports, politics, beauty, school, etc.  Everyone wants to be better than everyone else.  I don’t know if I want children but if I do have them I would do everything to teach them that people are equal and that winning does not equal success.  Life is the journey not the outcome.  In high school we all had different clicks and so many people longed to be part of the “popular” crowd.  Well, if you have made your way out of high school you have learned very quickly that that entire crowd has now bearing on your life and their status in high school is most likely not following them into their adult lives.  Status and winning is only important in a moment but it is the experience that should be made to value.

The woman who dressed her young daughter as Dolly Parton – complete with a padded bra and sculpting underwear – for a child beauty pageant that aired on TLC’s “Toddlers & Tiaras” could lose custody of the girl after her estranged husband claimed she sexually exploited their daughter by allowing her to dress so provocatively.

Little Maddy Verst’s appearance in the costume on an episode of the controversial TLC program sparked a firestorm of criticism against her mother, Lindsay.

Her father, Bill Verst, has asked a Kentucky court to grant him sole custody of his daughter, who is now 6.

During a court proceeding Saturday, a judge threw reporters out of the courtroom, closed the hearing and placed a gag order on mother Lindsay Jackson. The judge also imposed a ban on any pageant activity for Maddy or her mother for the duration of the trial.

A court-appointed psychologist has sided with Maddy’s father, condemning the Parton costume and recommending that a judge make Verst the girl’s sole custodial parent.

Jackson said the costume was never meant to be sexual and that she shouldn’t be at risk of losing her daughter.

If the judge grants Verst’s petition because Maddy did pageants with her mother, “then that opens the door for any parent to challenge anybody on any activity that a kid does, period,” Jackson told FOXNews.com.

Jackson dressed her daughter herself in the Dolly Parton costume, telling the TLC show’s cameras, “When she wears the fake boobs and the fake butt, it’s just like an added extra bonus and it’s really funny when she comes out on stage and everybody thinks it’s hysterical.”

Not everybody thought it was hysterical, however. Some online commenters were quick to express their disgust for the costume and for the perceived sexualization of little girls on the show.

It’s not the first time a pageant mother has come under fire on the show.

Wendy Dickey was condemned for dressing her 3-year-old daughter, Paisley, in a racy costume that mimicked the outfit worn by Julia Roberts’ prostitute character from the movie “Pretty Woman.”

The costume consisted of a fitted, skin-baring white blouse, tight blue mini-skirt and thigh-high, shiny black boots. Paisley wore it all – complete with a blond wig, which Roberts’ prostitute character also wore – and critics and children’s advocates erupted in outrage.