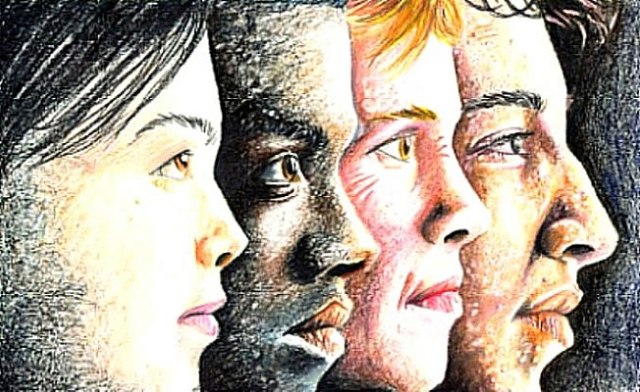 Why are your thoughts on racism?  White supremacy?  Ethnicity?

So yesterday I took in a lot.  I read a lot and I researched a lot.  I filled my mind all day with new concepts and learned a whole lot.  I have days like that….days where I feel like I can’t possibly absorb as much knowledge as I would like.  If sleep weren’t a requirement in order to function normally then I would spend day in and day out trying to absorb everything I could about this world.

For my Graduate class I always try to stay ahead of the game.  My work schedule keeps me so busy and when I am off on the weekends I like to enjoy that time and not feel pressured to have to do school work.  For next week a discussion that we are having involves the topic of racism.  Part of the assignment was to watch segments from a documentary called The Color of Fear.  I looked everywhere in hopes of finding the entire documentary but everything I found stated that to buy it a copy would cost $150 or more.  I am unsure why this documentary is so expensive but nonetheless I watched the segments that were available through my school website.  The documentary shows a group of males (7 or 8) of them and the males are Black, White, Asian, and Mexican.  The entire documentary discusses the hardships of each race and how each race is affected by the others.  I have to admit that I had a very hard time watching even just these few segments because to be completely honest I felt like the white man was treated unfairly.  I understand that the white man is the majority and I understand that other races have gone through some horrible things (at the hand of the white man) but we are now in the year 2012 and racism occurs on all ends.  This man was yelled at by the black man and was told that he could never understand what it is to be black and the white man stated that he never had feelings like he was better than anyone else, no matter race gender or creed.  He just looked at everyone as human beings.  The black man attacked him by saying, “You believe that by everyone being human beings, means everyone should act white!”  I just couldn’t wrap my brain around this.  They kept barking at him that they hoped that they could come to a common group and reach the same goal but I could not figure out what the goal was.  They were unwilling to understand where he was coming from and believed the white man is the oppressor and this man could not even define what it means to be white but they expected him to take on their point of view and find truth in their words.  There was no common ground to be found.

I got so worked up during this documentary (just the segments mind you) because I felt like I was thrown into a group of people that does not represent ME. I understand that several years ago black people were slaves to the white people….but I, myself have never been part of this.  I do not condone this behavior.  I look at everyone as people.  We all have air in our lungs.  We all have feelings and emotions and so much to share with each other but instead people choose to live through a victim mentality.  I called my dad and this is what I said, “Dad, this might be a stupid question, but is it possible for black people or Mexicans or Asians to be racist or are another white people technically racists because we are the majority in this country?”  I asked this question because in viewing this documentary I felt like the white man was beaten down for things that were in the past….things he had absolutely no control over.  I am sorry but I am so beyond the victim mentality….I don’t care what color/ethnicity/nationality you are.  If you want something then fight for it.  What even boggles my mind is the blatant racism within our own races.  Life goes so far beyond the color of a person’s skin.  I have heard far too many times black people refer to themselves as a “N” word (yes I have enough respect to not even type the word because it is a disgusting and disgraceful term) as a term of endearment.  Two men can call each other that and it gives them a sense of “brotherhood”.  REALLY?????????  This was a term coined during a time when this group of people was oppressed in a manner that they were barely considered human and now it is being used as a term of endearment???  Something just doesn’t seem to add up to me there?

Yes, I am a white female.  Yes I am in the majority in this country.  I, however refuse to see all of the differences between people because of their color, race, gender, sexual orientation, religion, etc.  I choose to see opportunity for understanding.  If someone wants to point their finger and tell me that I will never understand then that is their choice….I will always ask the questions and I will always lend my ear to be educated.  If you look at me as being the oppressor then you are judging me unfairly because you are not allowing me to be an individual.  You are making me a number….a number that is one of millions.  I am sorry but two wrongs don’t make a right in my book.  ALL people should be treated with kindness and respect.  I know that is a pipe dream but this whole race argument is getting really old in my book.  Jewish people were sent to concentration camps and were brutally murdered just for the fact that they were Jewish.  These people were treated like lab rats.  I read a story once about how a group was used in an experiment.  They had different bones removed from their legs to see if they would regenerate.  If that is not inhumane I do not know what is????

It breaks my heart that we still have arguments like this and that people are unable to see beyond the color of the skin.  I work in a restaurant that has this beautiful diversity and my co-workers are my family.  I love them for what they have been able to teach me about their cultures but that is not the main reason I love them.  I love them for their kindness and their open hearts….they never saw the color of my skin or saw me as the majority or as the oppressor.  They saw the goodness in my heart and my desire for friendships.  Anyone can be a victim if they want to be but anyone can also be a hero.  There is no question as to which one I would choose.  We can bitch and moan about what happens in this country and how different races are treated but there is no comparison as to what happens in other countries.  I would fear having a female child in some other countries knowing that she could be sold into slavery before she is even a teenager, brutally raped before she even has her own period, never able to receive education because she is considered worthless in her country (as most females are).  I have a problem with the victim mentality in this country because I know what goes on in other countries…those are the real victims.  In the book, Half the Sky that  just finished there was a piece that talked about a 3 year old girl that was raped and because she was now considered unclean her father put a gun up her vagina and fired it.  She survived but there was so much internal damage that this girl would be bed-ridden the rest of her life and would never be able to have functioning bowels or kidneys.  Also, the healthcare in Africa is not exactly exceptional so just imagine the pain and the infections this young girl endured.  That is what a real victim is!!!!  When I start to think my life is so unfair and so terrible, these are the stories that I think of.

We are people.  We all have the capability for good and kindness.  Some people just choose not to ever use those capabilities.  Some people are brainwashed by their own people.  Yes I do know life as a white person and I am proud to be white but I have been ashamed many times of people from my race….not my race as a whole.  Where we stand on the issues does not have to do with the color of our skin….it has to do with what we feel in our hearts.  Some whites have been trained to hate Blacks, some blacks have been trained to hate whites, some whites have been trained to hate Mexicans and so on and so forth……BUT some groups have also been trained to hate “their own kind”.  Violence occurs every single day between members of the same race.  The white man has killed another white man for some reason or another.  Watch the news and see gang riots in Chicago and all of the participants are black males.  There are stereotypes of about every race and every group.  Whites are rednecks.  Blacks are thugs.  Mexicans steal.  Muslims are terrorists.  The actions of one or a few should not represent an entire group of people….THAT IS JUST UNFAIR!!!!