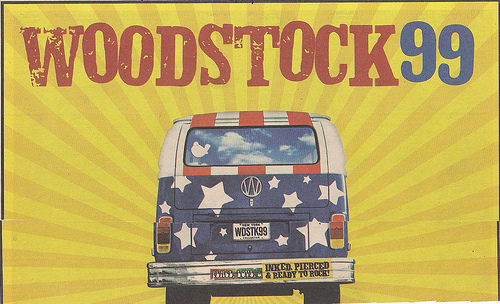 What is one of the craziest things you have ever done?

In my 33 years of life I have done a lot of crazy things.  I have had many nights of drunken debauchery and done inappropriate things with boys in semi-public places (leave your judgment at the door-I am far from perfect but I am honest ;0)  When I think about my life and evaluate my journey of crazy scenarios and wild rides I keep flashing back to going to Woodstock ’99 (no not an acid flashback-haha).

I was 20 years old and it was the summer between my junior and senior year of college.  My best friend from college lived in New Hartford which was only 20 minutes away from Rome, NY where they were holding Woodstock ’99.  I knew I HAD to go.  I slid the idea past my parents and immediately got shot down.  After a couple of weeks I figured they must have forgotten so I asked them if I could go to Sylvan Beach (in the town next to Rome,NY) to hang out with my best friend (the dates just happened to coincide with the dates of Woodstock ;)…how convenient right)???   I won’t surprise anyone by saying that my parents were so on to my scheme.  Deep down I think they knew I was a good kid and even though they didn’t love the thought of me going to Woodstock they couldn’t keep that tight of a grip on me….and if they didn’t know before I went they certainly knew by the time I got home.  I was covered in bruises and dirt and was lobster red from 3 days of beating down sun.  I think it was quite obvious I didn’t just take a relaxing trip to Sylvan Beach.  :0)

Woodstock was a once in a lifetime experience and it definitely had its ups and downs but I could not be more happy that I got to experience it.  Like I said, my best friend lived 20 minutes from the Airforce base where the festival was being held.  We decided we were going to arrive early Friday morning so we could get a decent parking space and get our tent set up.  We left at 5:30am and finally arrived on base at 9:30am….yes indeed it took 4 hours.  Traffic was just creeping.  250,000 people attended this festival.  We parked our car and trekked the 2 miles to the west gate to finally get into the festival we have been so anxiously been waiting for.  We found a spot close to this entrance to set up our tent.  There were quite a few thousand people that had already arrived the night before.  While setting up our tent I turned my head to the left to witness a guy leaning out of his tent throwing up all over the ground…yep this was Woodstock.

The three days we spent at Woodstock were unbelievably memorable.  There were down sides ($5 bottles of water, dirty, scary porta potties, excruciating heat) but it still did not take away from the experience.  There were two stages set up on the base (the west stage and the east stage).  The big acts (Dave Matthews, Rage Against the Machine, Limp Bizkit) were held on the West stage while smaller acts (Rusted Root, Our Lady Peace, Insant Clown Posse) were held on the East Stage.  We mainly stayed at the west stage since these were the bands we wanted to see the most but every once in a while we ventured over to check out a show on the East stage.  The stages were approximately 3 miles apart so it was a hike to go back and forth.  As time passed more and more people arrived and it became like a sea.  There were people everywhere and sometimes you would have to get your bearings to figure out where you were because of the amount of people surrounding you.

The first show we saw was James Brown at high noon.  We planted ourselves on the grass and let all of the festivities roll in.  We met so many different people from around the country…it was amazing how many people traveled thousands of miles for this festival.  I even kind of sort of had a Woodstock boyfriend.  He was younger than me which was not normally like me and I find it funny that I remember his name being Jake (when I can’t remember some of the guys names I dated within the last year…hahaha).  We sat on the grass and watched shows all day long surrounded by people drinking beer and smoking weed.  There was supposed to be a pretty strict security search when you first arrived but with the amount of hookas and bongs I saw I immediately knew that wasn’t happening ;0)  People were having an amazing time despite the raging heat.

My best friend and I saw an endless amount of shows: Dave Matthews Band, Rage Against the Machine, Korn, Limp  Bizkit, DMX, Jamiroquai, Jewel, Red Hot Chili Peppers—this is only scratching the surface.  For $150, the heat and the high prices of food and water were totally worth it in my opinion.  Vendors marked up prices because they could and I didn’t blame them.  Tickets to concerts to see only one performer (maybe an opening act as well) can cost up to $100 a piece nowadays…$150 for a 3 day weekend of nonstop bands (popular amazing bands at that) was completely worth it to me.  There was rioting and there were big blazing fires at the end and a lot of the news coverage blamed the high prices of food and water and people’s irritability but what they failed to mention is that the day before (Saturday) that they handed out candles to 250,000 people in plans of doing a Jimi Hendrix tribute.  Maybe this is my own ignorance but if you hand out 250,000+ candles to concert goers that have been in the blazing sun for three days with very little sleep then you are ASKING for a fire.  No, I do not condone what happened at Woodstock in regards to the fires and looting…I do think that there was not a lot of preparation and planning on behalf of the venue.  I am not sure if they were truly prepared for that many people and I do not know if they had enough staff on standby if needed.

Regardless of the fires and the looting I would not take back this experience for anything.  I got to spend the weekend with my best friend in the whole world and we experienced so many amazing things.  My best friend got a butterfly airbrushed on her boobs and walked around topless all day….she was even featured on VH1  (I did not have the balls to do the same).  We ran into friends that we went to college with (how crazy is it to run into people you know amongst a crowd of 250,000 people), we met VJ’s from MTV, we met and befriended people from different countries that had traveled to the United States for the first time just to see some of the bands, we peed behind a chain link fence (the porta potties were gross and too far away) and totally got busted by some random guy, we saw dozens of concerts that we would have never seen otherwise.  The shows were amazing but by far my favorite was Rage Against the Machine.  The lead singer, Zack de la Rocha, did not speak to the audience even once but the performance was flawless.  I have always been a Rage fan so to see them live was absolutely amazing!  The lights, the sound and the crowd reaction made it just that much better.

Woodstock was three days filled with chaos and craziness.  I left tired, dirty and bruised but it was an experience that I would never ever give back.  My parents ended up picking me up at the mall and when I arrived they knew immediately that I had lied and went to Woodstock instead of Sylvan Beach (they knew all along but I think they were just in denial).  The time they started worrying was when they saw the fires and the looting on TV…but being smart ladies that we were, we got the hell out of dodge as soon as all of the madness began.  By that time (midnight on Sunday night) our time was spent.  We both just wanted a hot shower and a warm bed.  I look back on that time and I smile thinking about something that I did that in a million years I never thought that I would.  People can ridicule and insult this festival but until you are there you really don’t know anything about the experience.  It truly was something worth it…in my opinion the good indefinitely outweighed the bad.  I can’t say I would do it again (since my ass is no longer 20 years old) but then again who knows.   Guess we will just have to see what the future holds.  ;0)  I feel like I can’t even give this whole festival and experience justice in the written word…it was one of those once in a lifetime experiences that although it was filled with insanity it was something that I couldn’t be happier that I will always be able to hold onto the memory of.

So to my readers, what is one of the craziest things you have ever done????