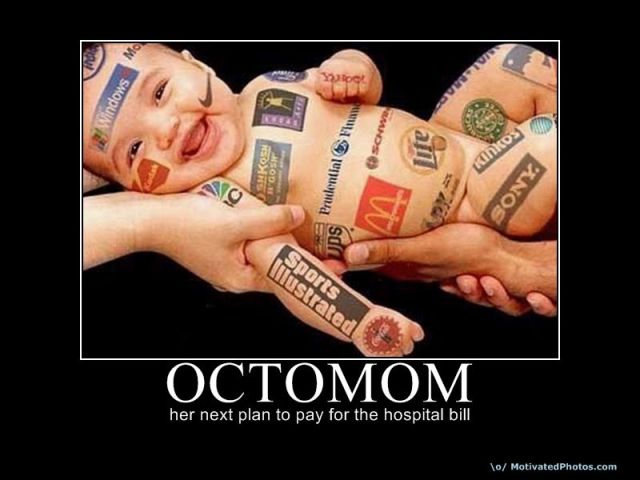 What are your thoughts on the “OCTOMOM”?

In some of these entries I just babble and in some I can’t get my thoughts quite together to express exactly what I am feeling.  It is as if I can feel the emotions and the thoughts bubbling to the surface but sometimes being able to convey the passion in my words becomes difficult.  There are a bazillion topics that strike my interest and immediately my brain and my emotions go into overdrive and I am not always able to convey exactly what I am feeling or thinking.  I wish people were able to jump in my body at random times when I am having these moments then the lightbulb will go off and they will say, “Ooooooh, I get it.”

Today I have chosen a topic that in some ways is probably superficial.  What my thoughts about the Octomom are have no real significance or impact on the world or on their situation but I still have an opinion and since this blog is called: In My Opinion, I thought what the hell!

I have to be completely honest.  I TRY really hard to see the good in people.  I TRY really hard to understand their situation and see where they are coming from and strive to be understanding because I am not in their shoes BUT with this woman named Nadia Suleman I just have great difficulty feeling any remorse or any compassion for her.  If you are unaware of who this woman is (how that is possible I don’t know because her picture is constantly splashed on the news or on the tabloids), she is a woman that had six children then decided to get in vitro fertilization (as a single woman). 8 eggs were implanted in her uterus and all 8 eggs attached and she is now the mother of 14 children.  I have no problem with a woman or a man raising a child/children on their own but this woman has NO BUSINESS getting in vitro when she already had 6 children and at that time she was struggling to pay the bills.

This woman has no affect on my life and what she does is her business, I am strictly stating my opinion because everywhere I seem to turn her face and her sob story are splattered all over.  My opinion of this woman is very low because she does not at all convey sincerity.  This woman screams to me that she is just looking for attention and her priorities are all sorts of out of wack.  14 children are living under a roof with this woman that to me seems mentally unfit.  These children don’t stand a chance for normalcy at all and she keeps defending herself.  Below I have inserted a clip of her on the Oprah show and the entire time she is going on and on, I couldn’t help but watch Oprah’s face and how obvious it was that the Octomom was putting on a show.  I can’t put my finger on why I feel the way I do….I just feel like her actions never seem to match what she says.  She seems to eat her words a lot.  She is endangering the welfare of her children by not allowing them to get the individual attention that they each deserve.  I read an article the other day and her own mother has washed her hands of the situation.  If her own mother does not want to lend a helping hand to raise her grandchildren then there are some serious red flags waving in the wind in my opinion.  Her and Kate Gosselin both sit on the top of the list when it comes to unfit mothers.  They have both exposed their kids in the media and they have (again in my opinion) have sought fame and recognition and that just sends such a poor message.  I write tons of blog entries about children and how important raising them properly is.  These two women are so very self-absorbed and want so much attention that they are completely depriving their children of normalcy and the ability to understand the concepts of modesty and sincerity.  These children are made to be props in life and I think that is so wrong.  If later on in life (when they are able to understand what the media really is) they choose they want that life then that is fine but being exposed to cameras and the public from the time they are newborn babies (by parents choice) is just wrong.

I wanted to include some articles and videos just to get some other people’s opinions.  Maybe I am being too harsh….I don’t know????  I just can’t shake the feeling that this woman is constantly putting on an act.  Does anyone else feel this way?  If not, what does she convey to you?

Octomom Nadya Suleman: Child Services Investigation Was a “Set Up”

After Orange County Social Services Agency launched an investigation of Nadya Suleman Tuesday, the mother of 14 spoke out to Good Morning America Thursday saying she was “set up.”

The investigation occurred after Suleman’s hairdresser visited her home and subsequently filed a complaint about the conditions Suleman’s 14 children were living in. The hairdresser claimed the famous mom locked her children in a room using a chair and made them use portable toilets outside. She allegedly released photos to TMZ to back up her claims.

Suleman, who became known as “Octomom” when she gave birth to octuplets in 2009, defended herself on GMA.

“She thought it was unacceptable that they’re half-naked going potty,” Suleman, 36, explained, explaining that the toilet inside was broken. “I mean mom is out there, come on.” As for the claims about the chair, she clarified that one of her older children propped the chair under the door handle to stop the children from entering the room and opening and closing the door.

Suleman’s hairdresser also said she paid $520 for a Brazilian Blowout and haircut. “I am making money, though. I have jobs and I can afford it,” Suelman claimed. She also explained that the bill included 14 other haircuts for her children.

The mother recently posed semi-nude for a British magazine. “I’ve been using the media to pay the bills,” she explained. “Any offer, now, is to take care of my kids.”

Following the investigation, the OC Social Services Agency concluded that Suleman’s children were safe and no further action was taken.

My last words here are that I truly believe this woman is making one excuse after another.  Her house is covered in graffiti.  Trust me I understand that her house is going to be far from clean with that many children but there is no reason for the outside and inside of the house to be spray-painted and for the children to be sitting on potties outside (and who knows how full they are and how “clean” they are).  She even said that one of the kids propped the chair against the door…really?????  I just am unable to feel remorse for this woman.  She is playing the role of a victim and there is nothing I cannot stand more than that.  She had no business having anymore children and she has made one poor choice after another and the people that are suffering are those innocent children.  DISGRACEFUL!