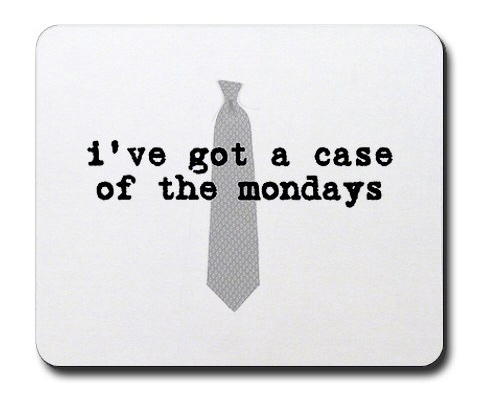 Have you ever had a case of the Monday’s?

What a day!  What a day!  What a day!  Boy this certainly was a Monday…actually I think it was MY Friday the 13th.  I am late on this entry because last night I was using my computer and fell asleep and when I got up I packed it up in my laptop bag and went to work.  When I got to work….LUCKY ME…it would not boot up at all.  Mind you, this computer is just over a month old.  I called Toshiba and luckily it is under warranty.  It is just a hardware issue…more or less a random dysfunction.  So, I get to send it out tomorrow to the Repair Depot and I will have it back in 7-10 days.  Thankfully my old laptop is still functioning…slowly by surely.  Surprisingly though I did not freak out…I can be known to go into panic mode when these things happen…I think the meditation is really doing me some good.  The only concern I had was an assignment on my desktop that needed to be posted by tomorrow.  Another hint of luck…a good friend of mine is a computer guru and he was able to pull all of the stuff off my desktop and put it on a flash drive.  BIG SIGH OF RELIEF.

This evening I had another “issue” with my slumlord…oops I mean “landlord”.  This woman is a real-estate agent and she manages this property.  An older couple owns this unit and she takes care of the rent and any repairs for a percentage.  She DOES NOT own this condo.  All I can say about this woman is that she HAS to be the most unstable, mean, vicious woman I have ever encountered.  I finally had enough of her treating me like shit and on Easter Sunday I received an email from her with the starting line of it degrading and belittling me.  I lost my cool and just picked up the phone and called her.  I told her she was a bully and I was no longer going to take it.  In the midst of telling her this she hung up on me….she can dish it all day long but she cannot take it.  So, I contacted the owners of the condo and told them everything that was going on.  This woman has a reputation all  over this community for being a crazy bitch…she is not even allowed to go into the property management office anymore because she had to be escorted out by authorities last time (she went in demanding phone numbers and addresses of everyone in the community and they refused to give her that information).  Anyhooooo, the owners called me yesterday and told me to solve the matter that we could send them the rent and until the situation got straightened out with their lawyers that they would just mail her her percentage.  Well she did not like that and she sent us both emails (she never calls…it is always email).  Ok let me remind you….the owners pay her a percentage but this is their place…THEY OWN IT!!!  I wanted to send you the email to show everyone how unprofessional this woman is…anything in parentheses is my comments:

Now I have my glasses on.

As long as a tenant is in place, that is my tenant and I will be paid. Is that clear Mr. Kuhn.

Diane, you have been in that property since December 1, 2009. I have a lease with you and your new room mate from Dec. 2010, after that, lease went month to month.

Mr. Kuhn. Edna already tried to muscle in on my action several months back. I didn’t allow it then and I will not allow it now. And by the way, when this tenant left, I had no interest in continuing on with you based on those actions. I find the way you do business offensive. I remember oh too we’ll how Edna handled business between myself and George Sala. remember him? I do. And the only reason I contacted you at that time was to take the listing away from him. And the by product was a good benefit for you as I’m excellent at what I do. I really didn’t like you much then,  for the exact reasons you are currently exhibiting now. I know how you are.

The hand that feeds me, give me a break?

Diane is acting like a child who didn’t get her way with one parent and is now going to the other.

Diane is not real big on household chores (she has no idea about this). The first time I went over there I couldn’t believe you didn’t have the common sense to take the garbage out. It was disgusting. And it happened again this time. My repair guy said the sink was full of dishes when he came over. He was coming over to fix the garbage disposal, common sense might be that you should remove the day old dirty (?)dishes from the sink. No, he had to do it to get to the disposal, and what he pulled out of there he’d never seen. (All of this is an exaggeration…we by no means live “hard” or like pigs…and how we live is of no concern to her anyway…we paid a security deposit for a reason).

Speaking of good tenants Mr. Kuhn. Be prepared to replace the carpet in the living room. It is nasty. (It is not nasty even a little bit…the carpets have been steam cleaned)

So now Diane, if you’ve been so unhappy for so long? Why have you stayed over two years? (I have not been unhappy….I just always avoided talking to her because she is soooo mean)

The only time I’ve had any interaction with you was when you needed something. And how how long did you have to wait for service? Uh, let me help you out…Immediately?

Mr. Kuhn. I have done an excellent job for several several years. YOU HAVE NEVER, NEVER MISSED ONE MONTHS RENT BECAUSE OF ME!

Your cheap and trying to squeeze me out. You tried it several months back. I’m not new to this rodeo or people like you. (She is speaking this way to the people that PAY her)

But as I said in the past two emails, Diane, listen up… Oh, and your roommate too, because the eviction will be file on him also, you have two choices…

2. Continue paying Full Sail RE as you have for the past 2 plus years as long as you live in that property.

That’s it from me, I hope You are all perfectly clear. I am.

By the way, 45. Mr. Kuhn to repair the garbage disposal.

Any other plumber would have charged well over 90.

Unprofessional. The only time I hear that is when people don’t get their way.

Normally something like this would have made me start feeling really anxious but I read all of this and even though I think this woman is crazy and I have now refused to deal with her anymore, I am thankful I do not treat people like that and I act way more professional than she could ever dream of.  I guess I am amazed that people really act like that….especially a business owner.  So it definitely wasn’t the best start to the week but I am happy with how well I handled it.  I just have kept reminding myself that things just happen and we must just keep moving forward.  It would suck to have to move out but if it came down to that then so be it.  My computer breaking was a downer but those things happen too and I have a backup so alls well that ends well.

I hope everyone else’s week started on a little bit better of a note than mine did and if not I hope it progressively gets better and better!!!