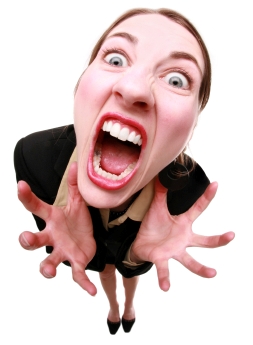 What is something you would like to vent about/what are your pet peeves?

Today has been the laziest Sunday ever.  I work this morning to big claps of thunder and the sound of rain beating against my bedroom windows.  I knew it was going to be a day to stay in my pajamas and just relax.  I worked last night at the restaurant and it was our 2 year anniversary.  It was a good night…pretty busy and my body is feeling the crunch from running around nonstop for several hours.  I love the job though.  Many of the people that I work with have become family to me.  There may be hiccups that occur every once in a while and some nights may make me want to pull my hair out but overall I love the job because of the people I work with and how I get to interact with a wide variety of people while I am there.  I had never worked at a restaurant prior to this and I was nervous when I first started but to be honest once I got the hang of it I was pretty much a natural.  I have the personality for waiting tables.  Anyhoooooo…

The reason I chose to answer this question today is because lately I have noticed certain people’s characteristics and how they flow through each day (yes I do have certain people in mind).  There will be days I feel like shit or feel like nothing can go right but that is just life.  I bitch about it, I accept it and I move on.  It seriously amazes me how some people are unable to do that.  There have been one or two people (I will leave them nameless) that I have encountered lately that seem to bitch about every teeny tiny little thing that occurs in their lives.  There is a new woman that I work with at the restaurant (she is 43 years old) that started about 3 weeks ago.  In the restaurant business you can be trained but a lot of learning comes from trial and error and just having things come as they come.  It is really not difficult.  Unless you choose to make it difficult.  This woman CHOOSES to make EVERYTHING difficult.  She came into the job with enthusiasm and seemed very excited and she was told how everything worked.  Some nights may be chaotic and you will be moving for several hours straight.  She was told the good parts as well as the chaotic and stressful parts.  Nothing was hidden from her.  She was also told she would have a pretty set schedule which is very rare in the customer service industry so she has been very lucky.  For the past week all I have heard from her is nonstop bitching.  She is told one thing from one person and one thing from another person and it is just so frustrating.  I understand that can be frustrating but seriously…”Bitch for a minute to get it out and MOVE ON!!!”  She is absolutely incapable of doing this.  I had to listen to this woman complain about her frustrations yesterday for 7 straights hours.  She bitched about rice for an hour…her face read nothing but annoyance.  Seriously, how do people function like this???  If you listened to this woman talk, she acts as if her life is so traumatic and sooooo filled with stress.  There are people out there that have lost their limbs due to terrible diseases or have no food to eat or running water but her life is still worse.  It absolutely amazes me.  I hate even bitching about it because I like to try to think as positively as possible but it is the encounters with people like this that can really bring me down.  I just want to tell them to get in touch with reality and realize that there are millions of other people out there that have it way worse.

If she were to read this right now I would be willing to place money on her reaction.  She would tell me I didn’t understand and how dare I and blah blah blah.  It amazes me how some people have to live a life of drama in order to get by.  Everything needs to be blown out of proportion times 100.  She has a roof over her head (in a house that sounds pretty nice by the way she has described it), her husband works a good job, she has a job (that was pretty much handed to her), she has a daughter in a wheelchair (yes that can add some stress but her daughter has complete mental health and is able to get in and out of bed and has some movement).  I understand stress…trust me I do.  I had been diagnosed with panic disorder years ago and I have been on and off medication since I was 18 years old.  Even through the roughest of times, when I thought I was losing my mind, I never saw the benefit of bitching about every single little thing in life.  We control our lives and our circumstances.  We have choices.  How can everything be so bad?  This girl, came in and applied for the job and pretty much was hired on the spot and now she is bitching about not seeing her husband as much or having to work on a rainy Sunday.  I am confused as to what the hell she wants????  It reminds me of the women that constantly bitch about being fat but don’t do anything about it.  Yes, I have struggled with my weight all of my life but never did you hear me once bitch about being fat.  I was the one in control of it.  I knew that if I didn’t like the way I looked that I would have to work hard and change my lifestyle and the weight would come off…so that is what I did.  There is nothing I hate more than hearing a woman bitch about being fat while she is shoving a Krispy Kreme donut in her pie hole.

I feel like this is a negative entry and that is not my intention.  I have just come to realize that in life out path is determined by our choices and so many people whine and complain when it is their own fault for the situations they are in.  They want things just to happen for them but they do absolutely nothing to make those things happen.  I have a girl friend that nonstop bitches about hating where she lives and how she is meant to live somewhere else and blah blah blah (yes, after hearing it 1,000 times that is all I hear) yet she sends no resumes out or does not visit other places to see where she might like to live.  Does she expect a horse shoe to be shoved up her ass then suddenly everything will just fall into her hands????  That would be like magically winning the lottery without even playing.  Hard work can be hard (crazy huh) but the results in the end can make it all so worth it.  I have learned this time and again.  I did need to vent about this because lately I have encountered some of the laziest people that bitch about every tiny little thing and they do absolutely nothing to improve their situations.  Shit or get off the pot!  My boss at the restaurant works 2 jobs (easily 80 hours a week if not more) and he is one of the most positive, fun, happy people I know.  He is this way because he knows he works hard and he feels good about it.  He knows that not everything is going to run smoothly every minute but he accepts it and moves on.  If people need to vent about things that is understandable, I just don’t understand when people chronically complain about the same stuff over and over and over again.  Again, life is full of choices.  If you don’t like your circumstance then change it.  And if you are going to followup and tell me that you cannot then you are your own biggest obstacle.  I will be anyone’s friend and I am a great listener and I believe I am a great support system but to be completely honest, if someone is going to complain but never do anything to make the situation better then I can really only stick around for so long to hear it.  I don’t enjoy people like this because in my opinion they are selfish.  The only thing that matters is them and that is just not how I work or think.  I absolutely love helping others because that is what makes me feel good (maybe that is selfish but I would rather be selfish in this way than the other).  People that are focused on the negative like this don’t realize how often they put other people in bad positions.  Their attitudes bring everyone down.  In my opinion that is not fair at all.  I realize I am being negative now and after I post this I will let it go.  I will not let my pet peeve/need to vent control my entire day/week/month.  I just needed to get this off my chest because sometimes my pet peeves can get the best of me.  We all have them and I just thought this would be a good outlet for me to get it out.  Thank you for lending your ears.  :0)  Btw…what are some of your pet peeves???